On Feb 20, 2015, I was warned something incredibly difficult was going to happen to me. I remember it clearly and its been on my mind ever since the day I lost Jon.

I was getting close to the end of my pregnancy, Jocelyn would be born a week later, so I had been intentionally spending time with God knowing that it would be difficult to linger in His presence with an infant to care for. So I grabbed my Bible and journal and prepared to go through my quiet time routine. Routine it was not.

Even though I grew up in the church, I wasn’t taught how to hear God’s voice for myself until I went through ministry school. (It’s a skill I am very passionate about and have since taught it at a couple different retreats and conferences.) In the five years since I have had amazing, empowering, convicting, refreshing conversations with God on a regular basis. But that conversation.. that conversation was different than any others.

The pages of my journals are full of the same pattern: I write out my prayer in black ink and then write what I hear God say in colored ink. I didn’t have time to grab my pens before He started talking and I was so overwhelmed that I only was able to record half of what He said.

They say that the majority of communication is tone and body language. His tone was intense and serious to the degree I had never encountered. I felt as if He was grabbing my face in His hands and looking me straight in the eyes while He spoke. He had my attention and I was a little afraid. Most of the time He calls me “My Darling” or “Dear Heart” but this time He simply said “Erica,”

“Erica, I am being quite serious. I need you to know that whatever happens, I will be right there holding your hand…”

“Whatever happens.” There was so much weight on those words that I was very afraid. He went on to speak about peace and to not be afraid, but I couldn’t shake the feeling of dread. Something was going to happen. God wouldn’t have said this if it wasn’t something big and difficult. But what? What was going to happen? My first thought went to the baby. Was Jocelyn going to be ok? Was I going to lose her? Or was it me? Was something going to happen to me during labor? Was there going to be some sort of complication?

A couple days later at a doctors appointment, they saw a concerning reading on the ultrasound and Jocelyn was looking much smaller than they wanted. They sent me to the hospital for monitoring and depending on what they saw they would either send me home or deliver  Jocelyn that night. I thought to myself, “Ok so this is what God was talking about.”

I felt peace through the whole process and it turned out that I could go home. Jocelyn was born a couple days later with no complications except a lower birth weight than they would have liked and I had the easiest labor and delivery that I ever heard of. So after it was all said and done I remember thinking, “Really God, you got me all freaked out because Jocelyn was going to have a low birth weight? A little excessive don’t you think?” And then I completely forgot about that whole odd, intense conversation. 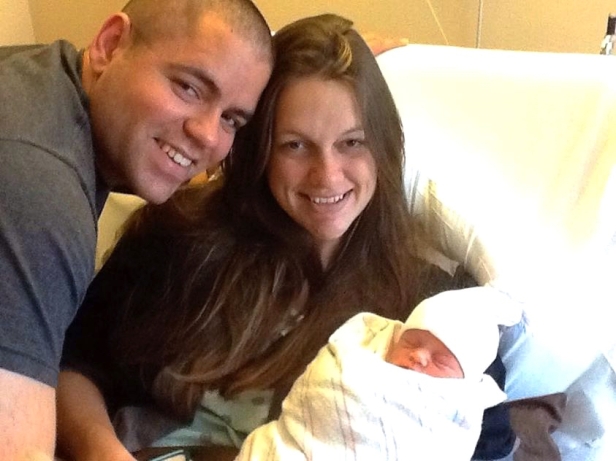 Until a year and two months later when I lay in my bed in a sleepless, numb state of shock, grief and exhaustion. Then I remembered.

After a few weeks when the shock wore off, the numb detachment I had towards God turned to anger. He knew. All this time He KNEW! It didn’t help that so many people thought it would be appropriate to remind me that the sudden death of my husband was all part of “God’s plan” for my life.  The idea that God had this whole inescapable nightmare planned out made me resent Him. How could He do that? How could He have planned to take away my husband, Jocelyn’s father and then to add insult to the injury, give me another fatherless child to care for? I felt lied to, cheated and betrayed by the God I had served so faithfully for so long.

(Side note: when someone is going through any sort of trauma, DO NOT tell them that it is part of “God’s plan”. This includes Bible verses. It is incredibly unhelpful. In fact, not only does it not do any good at all, it actually adds to the trauma. Unless you yourself have gone through a trauma of similar magnitude I recommend not giving any advice at all unless you are asked. This includes Bible verses.  Even though they are truth they won’t be heard. The only verses that I found at all helpful came with the person’s own story of overcoming something difficult. Cliche verses don’t help. Sorry. Didn’t mean to rant. Love you all! I promise I’m not mad. Just trying to spare the next person.)

For a long time, I ignored God. I didn’t even want to hear what He had to say for Himself. I didn’t care. But God’s capacity for understanding, compassion, and patience is unlimited. It didn’t matter to Him that I was angry. It didn’t matter that I was forming hateful thoughts about Him. He understood my need for space. And then when I reached the time when He knew I had to hear from Him, He began to speak to me again, whether I wanted to hear from Him or not.  (This was one of the first times. You know He was really wanting to make sure I heard Him because He jumped straight to my nerd heart. lol)

It’s been five months since that morning when I groggily said goodbye to Jon as he stepped out the door to go play basketball. In some ways, it feels like it’s been an eternity, but I know it really hasn’t been that long. In these past five months, God has gently eased His way back into my heart and thoughts. In the process of reconnecting to Him I have come to understand something about “God’s plan”. Jon’s death was not God’s plan. God’s plan was Eden. God’s plan was paradise, life, love, and joy. Death, sickness, hardship, suffering, none of those things were part of God’s plan. Those things are a part of our lives because we live in a very broken world. A world that was broken when we deviated from God’s plan. God’s plan was not for me to be a 27 year-old widow. That happened because of the nature of human existence. God does, however, have this exceptional ability to make broken things beautiful. I’ve seen it in my own life many times. My life may have been shattered, but even before it happened, God was making a plan to craft a beautiful mosaic from the pieces.

Isaiah 61:1-3
The Spirit of the Sovereign Lord is on me,
because the Lord has anointed me
to proclaim good news to the poor.
He has sent me to bind up the brokenhearted,
to proclaim freedom for the captives
and release from darkness for the prisoners,
to proclaim the year of the Lord’s favor
and the day of vengeance of our God,
to comfort all who mourn,
and provide for those who grieve in Zion—
to bestow on them a crown of beauty instead of ashes,
the oil of joy instead of mourning,
and a garment of praise instead of a spirit of despair.
They will be called oaks of righteousness,
a planting of the Lord for the display of his splendor.

© Erica Roman, 2017. Unauthorized use and/or duplication of this material without express and written permission from this site’s author and/or owner is strictly prohibited. Excerpts and links may be used, provided that full and clear credit is given to Erica Roman and Erica Roman Blog with appropriate and specific direction to the original content.
Loading Comments...
%d bloggers like this: