It wasn’t something I planned to do. I had an outfit already picked out, but when I went to get dressed I discovered that the shirt no longer covered my growing baby bump. So I found myself trying on every shirt and dress in the house. Clothes were strewn about in a panic as I rummaged through every drawer, hamper and closet not two hours before I was supposed to meet up with the photographer. Then I saw it. Hanging quietly in the corner of my closet where it had remained for the last 7 and a half months: the dress I wore to Jon’s funeral.

I remember the first time I saw it. Jon and I were walking through the mall and I thought it was lovely. If I was the kind of girl who shopped, I would have bought it right then. But even when Jon said that if I liked it I should get it, my practical nature left it on the hanger. What occasion would I have to wear a dress like that?

The day I bought the dress was… I don’t even know how to describe it. I didn’t want to go anywhere, but I definitely did not want to go to the mall to shop for a black dress. One more reminder that I was now a widow. I felt like one of those poor souls in western movies that get drug behind a horse. I had to go forward no matter how much pain I was in. There was no other choice.

Jon and I had walked the mall three days before he died. I needed to buy some new running shoes and he had to get something for the wedding he sang for the following day. (I wonder if that couple ever found out their wedding singer died two days later? I hope they remain blissfully unaware.)

As I robotically followed my mother and sisters through the mall, I could see myself and Jon a few days before; like ghosts sitting in the food court and walking by the stores. I felt like throwing up or melting into a puddle of snot, spit and tears. Instead I put one foot in front of the other and tried to hide the fact that I was trembling.

It turned out that JC Pennys was having a dress sale. I scanned through the racks of reds and blues looking for a widow’s black dress. Then I saw the it, the same dress I had admired some weeks before. I didn’t bother looking for any others. I tried it on and that was that. 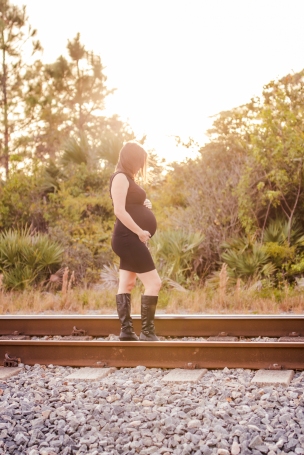 I didn’t know I was pregnant on the day of the funeral. As I spent the last few minutes alone with Jon, weeping as I ran my fingers through his hair and kissed his forehead, I had no idea that I was carrying his son.  When I found out a day or two later I wept just as hard.

I could barely manage myself day to day. I was overwhelmed with taking care of my daughter’s needs. How could I possibly manage the exhaustion that is caring for an infant? For a couple weeks I seriously considered adoption. I didn’t think I was strong enough to parent two children in my grief. I read up on the legality of it and even messaged an acquaintance of mine that had found her baby a loving home through adoption. But when I found out that the child Jon had given me was a son, I knew I couldn’t let him go. I would find the strength somehow.

While I no longer was distraught over the pregnancy, I still hadn’t found a way to be happy about it. I spent a couple months in denial. It was easier to not think about the baby at all. The fact that my pregnancy was virtually symptomless in the beginning (as opposed to my losing 15 pounds from morning sickness with my daughter) made it that much easier to forget.

But eventually my growing abdomen became difficult to ignore and the little one inside began to demand my attention. (He’s going to be a mover just like his daddy. He’s moving now even as I write this.) Every kick, poke and wiggle was as if he was saying “I’m here!”   Slowly I began to not only accept the new addition to my life, but to appreciate, love and anticipate his arrival.

In many ways he saved me, even before taking his first breath. If I did not have a pregnancy to stop me, I very likely would have charged down an unhealthy road. The limits I resented early on, were in fact what kept me safe until I was able to regain my sanity. He is a gift. A small light in a dark reality. That is why I decided to take maternity pictures in this dress. Because life is beautiful, even in pain. In the darkest of nights the stars shine out the brightest. The dress that I wore when I thought my life had been destroyed has been redeemed. For though I did not know it at the time, I was carrying life within me, even while surrounded by death. I could choose to remain in despair, but I have decided to choose hope. I choose life. I have embraced the pain and let it go. My son will be born in a couple weeks. It’s up to me to introduce him to the the world and the world I will show him is full of light, life and happiness.

If you’ve been touched by my writing or would simply like to support me in this journey you can do so by clicking here.

Thank you to Angela Demsick for taking these wonderful pictures!

You can find Angela’s information by clicking the link below.

Isaiah 61:1-3He has sent me to bind up the brokenhearted, to proclaim freedom for the captives
and release from darkness for the prisoners,
to proclaim the year of the Lord’s favor and the day of vengeance of our God,
to comfort all who mourn, and provide for those who grieve in Zion—
to bestow on them a crown of beauty instead of ashes,
the oil of joy instead of mourning,
and a garment of praise instead of a spirit of despair.

8 thoughts on “I took maternity photos in the dress I wore to my husband’s funeral.”

© Erica Roman, 2017. Unauthorized use and/or duplication of this material without express and written permission from this site’s author and/or owner is strictly prohibited. Excerpts and links may be used, provided that full and clear credit is given to Erica Roman and Erica Roman Blog with appropriate and specific direction to the original content.
%d bloggers like this: