I haven’t written in a while. My life has been a bit chaotic and has left little room to sit in peace and write. Now that things are settling down, I intend to carve out time for working on my book again. I’ve been carrying this blog in my heart for a few weeks now so I decided to take a moment tonight and get it out.

Those of you who follow me on social media will know that I am dating someone. No, I will not be writing the whole story in this blog like I did before, (Doolin and I remain good friends btw) but I am considering going live with him on my facebook page in a few weeks. Until then, I’ll tell you that his name is Neil and I love him very much. But this blog is more about the interworkings of my heart not my current love story.

“To love at all is to be vulnerable. Love anything and your heart will be wrung and possibly broken. If you want to make sure of keeping it intact you must give it to no one…

Wrap it carefully round with hobbies and little luxuries; avoid all entanglements. Lock it up safe in the casket or coffin of your selfishness.

But in that casket, safe, dark, motionless, airless, it will change. It will not be broken; it will become unbreakable, impenetrable, irredeemable.

To love is to be vulnerable.”

When a widow dates it is a completely different experience from the rest of the dating population.  I’ve already discussed in previous blog posts about the common experience of widows who chose to date being subject to judgment from others so I won’t further that point here. Luckily, I myself haven’t been on the receiving end of many negative comments. But that could be the fact that I obliterated any detractors before they even had a chance to say anything. 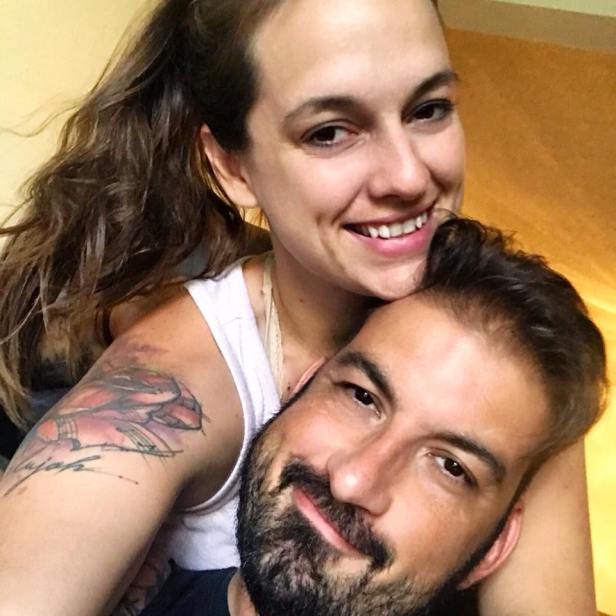 Neil and I have been “Facebook Official” since April, but we’ve been involved since January. While he isn’t my first boyfriend since Jon’s death, I’ve discovered that my time with him has brought up all sorts of feelings both good and bad that I hadn’t experienced before. I think it’s because a face to face relationship where you do life together consistently forces one to think more about reality and less about a fairy tale.

Not too long after I perceived Neil’s interest, I was hit with a wave of fear. I was suddenly stricken with the terrifying prospect of being widowed again. The uncertainty of it all overwhelmed me. There’s no telling if I’ll have 4 or 40 years with him. Death is so random and I’m in contact with enough widows to know that it comes in all sorts of ways in all sorts of timeframes.

Everyone knows logically that death parts us all at some point. But for me and others who have been widowed, death is no longer theoretical knowledge, it’s an intimate experience. So when someone who’s been widowed decides to date again… It’s like someone who survived a plane crash deciding to flying again. That person may know cognitively that flying is the safest way to travel, but that person also knows what it looks like to plummet towards the earth, the feel of the fire on their skin, the sound of screaming in their ears.

My first date with Neil started with ice cream. As I sat across from him eating my chocolate chip cookie dough there was an easy connection. Before we moved on to finding a place to get a drink I already knew I wanted a second date. Then, out of nowhere I saw, in my mind’s eye, a long scar on the side of his head. The one that was on Jon, from his autopsy, the one that I couldn’t stop staring at the last time I saw him. That image left me unsettled for days.

I wish I could say after a bit I was able to quiet that fear. It faded to the background for a while but it it rose up again last weekend and left me crying on Neil’s chest. As we talk about a possible future together it scares me not knowing how long I’ll have with him. It makes me feel like I want to cling to him tighter and run far away at the same time.

Dating as a widow brings with it complicated and conflicting emotions. The first time that Neil and I sat next to each other at church, the church that Jon and I had attended for years, I felt sadness with a twinge of guilt. It was as if Jon was sitting on the other side of me asking if I had forgotten him. I should have been all happy and butterflies that not only was I not sitting alone in church, but I was sitting next to my new boyfriend. (Which, in the church world, makes you practically engaged 😜.) Truly, I was happy and excited. I loved that I got to hold Neil’s hand while we listened to the sermon together and made little comments back and forth.. but the fluttery feelings were blended together with sorrow.

I also often feel guilty when Neil excels at an area of our relationship where Jon wasn’t the greatest. Everyone has different strengths and weaknesses and no marriage is perfect. I’m not perfect, Neil isn’t perfect and neither was Jon. But it’s hard to admit to anyone that Jon wasn’t always great at everything. Neil and I had a conversation once where he abruptly responded, “Wait!.. No one has ever done that for you??” I just sat quiet. That the answer was “no” made my heart sad and it hurt to admit and make known an area of my marriage with Jon that had been lacking. It feels like uncovering someone who isn’t there to defend themselves.

There’s also the catch 22 of happiness. When I’m happy and flirty with Neil, a part of me feels guilty for not being sad about Jon. When I’m sad and missing Jon, I worry that Neil may feel like second best or that I wish I was with Jon instead. I do wish Jon didn’t have to die..  I do want to be with Neil… It’s an endless circle but the best way I can say it is that Neil is my first choice in the life I’ve been given.

I know logically that there is no need to feel guilty, that I’ve done nothing wrong. But the mind is much quicker to understand truth than the heart. It takes acknowledging and then releasing those sort of complicated emotions in order to find peace. And it’s something I have to do continuously.

As Neil and I started talking seriously about future plans I started to feel anxious. It took me some time to figure out what it was that I was feeling because it had nothing to do with Neil. When I was finally able to connect with my heart I figured it out. There is a part of me that worries that if I marry again it will somehow make Jon’s death less of a tragedy in the eyes of others.

Right now when people see me with my kids and no ring, whether or not they knew Jon, they notice his absence. And when they notice his absence, in the tiniest fraction they feel his loss, even if it’s just a passing thought. They see and recognize what I lost, who I lost. When I meet someone new it doesn’t take many questions for me to have to reveal that I am a widow. (Even when I try to avoid dropping the widow bomb.) But were I to be married, and meet someone new it might take months for them to discover the husband that I lost. I don’t need to be known as a widow, but there is a part of me that feels the need for Jon to continue to be known. He’s supposed to be here and he’s not. Even if and when I am happily married once more, that fact will never be ok.

I will always carry Jon with me, speak of him to my children and reminisce about him with my friends. There’s definitely a sad thought in my heart that, when the time comes for me to remarry, people will see the new man in my life and feel that Jon no longer matters because “look, now Erica’s happy.” While someday will be another man’s wife, I will always be Jon’s widow.

Loving again is exciting and it fills me with hope for a wonderful future. But with that comes other complicated emotions. I started this blog with a quote from C. S. Lewis. “To love is to be vulnerable.” I might have to get that tattooed on me somewhere. It’s such a deep truth. There is nothing more vulnerable than opening up our hearts to love. But the price of closing off our hearts to love is dying before death. Life is precious and time is short. So even with all of the things swirling around in my heart, I choose to love boldly.

Joel 2:25 I will repay you for the years the locusts have eaten

9 thoughts on “Confessions of a Dating Widow”

© Erica Roman, 2017. Unauthorized use and/or duplication of this material without express and written permission from this site’s author and/or owner is strictly prohibited. Excerpts and links may be used, provided that full and clear credit is given to Erica Roman and Erica Roman Blog with appropriate and specific direction to the original content.
%d bloggers like this: